Lucy Craft Laney: A Woman Who Loved Our Children

Lucy Craft Laney was born in Macon, GA on April 13, 1854. She was the seventh of eleven children and her parents were former slaves. Their names were Louie and Rev. David Laney. Her father had saved enough money to purchase his freedom and his wife’s freedom as well. Rev. Laney was a revered Presbyterian minister and carpenter. He used the money he made on his side job to escape the life of slavery.

Armed with this strength and determination, Miss Laney’s parents set out to make sure that she had a great education. With the help of the slave owners sister, Miss Campbell, Lucy was able to learn how to read by the age of four. This was during a time when blacks were not permitted to learn how to read. Surrounded by this type of generosity and by her parents giving nature; her upbringing would contribute her future success.

Miss Laney would later go on to Atlanta University in 1869 and graduated in 1873. She became a teacher and eventually came to Augusta, GA. Lucy opened the first school for black children in 1883. She started with six children and at the end of the second year, she had 234 students enrolled. When the school grew, Miss Laney had to secure more funding to keep the school running. She was able to secure a $10,000 grant from Ms. Francine E.H. Haines, the President of Woman’s Department of the Presbyterian Church – USA, after she heard Miss Lucy petition for funding from the Presbyterian Church Convention. Touched by her generosity, Miss Laney named the school the Haines Normal and Industrial Institute. 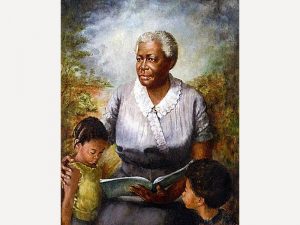 Miss Laney strongly believed in the empowerment of African Americans and stressed the importance of education as the key to economic freedom. This fueled her to also start the first black kindergarten in Augusta, Georgia and the first black nursing school, the Lamar School of Nursing. By 1928, the school encompassed a whole block and had over 800 students in attendance.

Miss Laney died on October 24, 1933. After her death, the Haines Normal and Industrial Institute was renamed Lucy Craft Laney Comprehensive High School and Gwinnett Street was renamed Laney-Walker Boulevard in the honor of her and that of Dr. Charles T. Walker, pastor/founder of Tabernacle Baptist Church and co-founder of Atlanta University. In 1987, her home was damaged in a fire but was later restored and now serves as a museum. Also, in 1974, Miss Laney had her portrait commissioned by then Governor Jimmy Carter and it was hung in the Georgia State Capitol. She received several honors throughout her life and after her death.

Visit The Lucy Craft Laney Museum!
The museum is the only African American museum in the CSRA. They have several exhibits that promote local African American artists, literature, and local history. They also offer several programs as well. Please see the website for museum hours and current exhibits.

CSRA Kids is the #1 resource for parents in the CSRA. We share kid related activities and information in Augusta, North Augusta, and Aiken.

Sorry, the comment form is closed at this time.